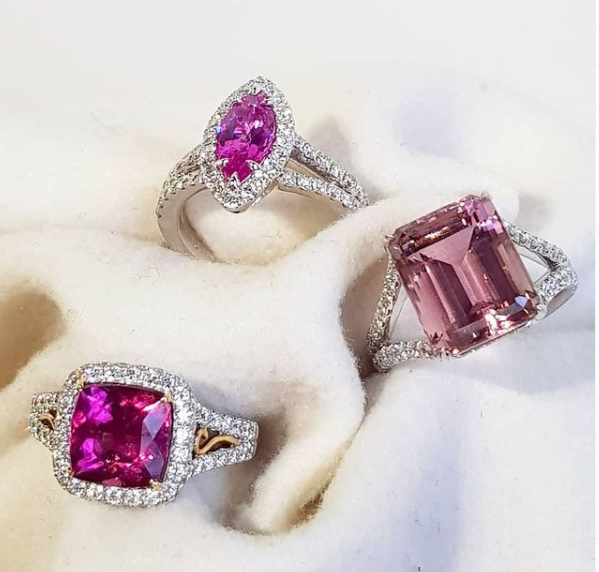 Katie Price recently announced her latest engagement to her latest partner, Carl Woods. This will be the eighth time the former glamour model has been engaged, and will be her fourth marriage if she makes it down the aisle.

And whilst eight engagements sounds like a lot of work, it also means she's stacked up a rather impressive collection of bling. Taking a close look at Katie Price's engagement ring collection, our diamond expert, Max Stone, reveals everything you need to know about each one.

Remember when Katie and Peter were the UK's most loved celebrity heart throbs? Meeting in the 'I'm a celebrity get me out of here' jungle, the two instantly connected and it wasn't long before they had a £1m fairytale wedding at the grand Downton Abbey estate, with a horse and carriage. Oh, and how could we forget Katie Price's enormous pink wedding dress and tiara?

But what about the engagement ring? Well, Katie didn't just have one engagement ring, it turns out she had three, after upgrading the first two for an even bigger piece of bling. Let's take a look at all three.

In the first ring, there is no centre stone, and instead it has a micro pave set, rectangular design. The band is most likely to be white gold, which is diamond encrusted all around the ring.

Despite selling her upgraded versions of the engagement ring for an estimated £230,000, it is claimed that the former model has kept hold of this one to give to her daughter, Princess, when she's older.

Moving on to the second ring, which is definitely much bigger, as it contains a very large pink/brown stone, that could again be morganite. From the unique design, it’s definitely been custom made, and looks like she’s chosen her own stone and asked for it to be surrounded by encrusted diamonds. This could be worth around £80,000 today.

The final ring is not the style of a typical engagement ring, and it’s clear the star likes large rings that are heavily encrusted with small diamonds, rather than the focus being on a centre stone. This is a pave set custom rainbow style ring, with around two carats of diamonds overall. If it was valued today, it would probably be worth around £60,000.

When cage fighter Alex Reid proposed to Katie Price in 2009, he popped out a huge peach rock on a diamond-encrusted mount. The ring was very similar to the second upgrade from Peter Andre.

This huge ring from Alex is a custom cut, micro pave set ring. The large centre stone is around 10 carats and looks like a checkerboard morganite due to its pink tones. The stone is surrounded with over 2 carats of small diamonds and would be valued at around £35,000 to £40,000.

The pair became an item just eight weeks after Katie's split from first husband Peter Andre, and they married in Las Vegas in February 2010.

When she split from Alex, Katie got engaged to Argentinian male model Leandro Penna for six months in 2012, after the pair were introduced at Sir Elton John's post-Oscars party.

After Leandro proposed in March 2012, Katie was pictured sporting a unique pink heart-shaped diamond encrusted design. This heart shaped ring features either a pink topaz or pink sapphire with cut down halo design with a diamond set band. Due to its vivid colour, it could definitely be a pink sapphire which are valued higher.  With that in mind, it would have a guide price of £15,000 to £30,000.

These two tied the knot just two months after meeting in the Bahamas in January 2013, after Kieron proposed on Christmas Day 2012. This does not look like a typical engagement ring as there is no centre stone. Instead, it has a five-row cut down setting, with around 2.5 carats of small diamonds. The diamonds are an F/G, colour grade and VS quality. From this, I’d say the ring is worth around £10,000.

Just two years ago, in 2019, Katie's next lover Kris Boyson popped the question, and Katie announced the engagement on ITV show Loose Women where she held a regular slot.

Katie met fitness instructor Kris in early May 2018, but split up temporarily throughout the relationship.

Unfortunately, after a turbulent relationship, Kris and Katie never made it up the aisle, and Kris sold her engagement ring. But what does the ring look like?

Interestingly, this looks like a Tiffany design, with the classic six claw prong setting. It’s set with micro pave diamonds encrusted on the band. It looks like a 3.5 carat diamond, with a F/G colour and VS clarity. A ring like this could be worth around £100,000.

Finally, we reach our final engagement ring, which was recently given to Katie by Carl Woods, after the pair announced the news on Instagram.

Although the image is difficult to see this looks like a five-carat emerald cut, diamond encrusted, wed fit design, meaning rings can fit flush either side. The diamond is a VS clarity, meaning it has little to no inclusions. From this estimation, I would value this ring at around £100,000 - £150,000.