Car boot sales are a great place to find hidden gems but these usually take the form of a valuable cutlery set or cheap electrical items. For one woman at West Middlesex Hospital car boot sale in west London this hidden gem was literally a 26.27 carat cushion shaped diamond ring. Bought for £10 in the 1980s, the owner assumed it was just a piece of costume jewellery and had no idea of its true value. She wore it regularly while carrying out chores and only decided to have it valued earlier this year. Following inspection, the Gemological Institute of America (GIA) recently confirmed it as a genuine diamond. 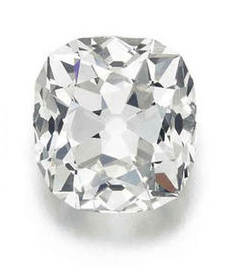 Although no one knows how it arrived at the car boot sale, the diamond, nicknamed the ‘Tenner’ diamond, is thought to have been cut in the 19th Century and may have once been owned by royalty. According to industry experts, it originates from the 1800s, before the discovery of modern diamond mines and at a time when very few diamonds were available.

The new owner is likely to re-cut it into a modern diamond that will emit even more sparkle and potentially be worth a multiple of the Sotheby’s estimate. Several diamond dealers have already inspected this diamond to assess how large a modern cut diamond can be made from it. After such an incredible find, people may be wondering how many other valuable diamonds or gemstones may have gone unnoticed among the bric-a-brac at second-hand sales.

Book a virtual consultation with one of our jewellery experts via Zoom, WhatsApp or in one of our showrooms.