Home • The Blog • How to choose your wedding ceremony

How to choose your wedding ceremony

The most meaningful moment of your wedding is the ceremony - exchanging vows and wedding rings and promising a lifetime of devotion. Your wedding ceremony choice affects the words you will say, the music to be played and the location of your big day. Here is an essential guide on how to choose your wedding ceremony, so it reflects what truly matters to you and your other half 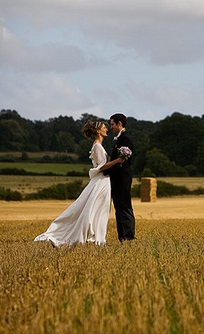 Religious wedding ceremonies are the most traditional choice and do not legally differ from a civil wedding ceremony. A Civil wedding is more of a legal contract between both partners, while a religious ceremony is involves promising devotion before friends, family and god. Apart from spirituality, the other difference between religious and other ceremonies is how the ceremony goes. Religious ceremonies follow a given order and requires saying specific things.

Civil wedding ceremonies allow the couple more control over the ceremony. You can choose what music is played and what words to say. The only exception to this rule is religious content - if you opt for a civil wedding, you and your partner are not allowed to include religious contents, such as hymns or prayers. Depending on the couple's preferences, traditional elements such as bridesmaids and the bride being walked down the aisle and passed to the groom can still be preserved.

To form a civil partnership or same sex marriage, make sure you have checked with the venue and your religious organisation. Currently, the Church of Wales and the Church of England can not conduct same sex marriage ceremonies, however any other religious organisation is allowed to carry out same sex ceremonies. Depending on where you plan to get married, explore your options and decide whether you wish to get married or form a civil partnership. Couples in civil partnerships have the same legal rights as heterosexual married couples, with some small differences.

For more information visit www.gov.uk/marriages-civil-partnerships/ or see the difference between civil partnership and marriages here.

Unfortunately, some couples may not be allowed to marry at a desired venue or hold a ceremony to please both sides of the family. The easiest and most flexible option for couples of different religions are humanist ceremonies. However it is possible for couples of two different religions to hold a a single religious wedding ceremony. If the families on both sides agree, a single ceremony can be held, combining readings and elements of both religions. Interfaith ceremonies are tailored to the couple, using sacred texts focusing on love from both religions.

Interfaith ceremonies allow couples to use vows, music and include rituals which are most meaningful to them. In England and Wales a formality at the registrar is required, while in Scotland and Ireland an interfaith minister is allowed to complete the legal aspects of marriage without a registrar. Alternatively, the couple may ask for two officiants depending on the religious organisations they are members of and their willingness to conduct interfaith ceremonies

Once you have decided which type of ceremony is most suitable for you, check with your preferred venue if you can conduct your wedding ceremony there. For instance, religious ceremonies could only take place in certain temples, while other ceremonies can take place in certain venues. Ideally, you and your partner would know what your dream wedding would look like before you start planning. If your wedding ceremony is abroad, it is worth checking with the embassy to avoid disappointments. If you are marrying abroad, make sure you have checked and have the necessary documents, gave notice and followed the correct procedures, so your marriage or civil partnership is recognised in the UK.

Read More: 9 Things to know before your wedding

Finding the right officiant is crucial to the wedding ceremony. Ideally, you would meet up with the officiant to discuss your ceremony and see samples of their work. Couples can choose from traditional religious officiants, interfaith ministers and humanist officiants. Choose your ceremony and venue before finding the officiant, to avoid surprises or disappointment. Unfortunately, some priests and officiants may refuse to participate in certain ceremonies or wed some couples. If your chosen ceremony is non-religious, your ideal officiant could be a friend or family member.

Book a virtual consultation with one of our jewellery experts via Zoom, WhatsApp or in one of our showrooms.